Thinking outside the (music) box.....

During this past summer, between eye surgeries, I spent some of the downtime working on a challenging kit.  I do like a challenge.  Coming up with an idea and running with it, then working out how to get over (or around) the various obstacles which inevitably crop up along the way.

I get a LOT of ideas.  ALL the time.  They just pop unbidden into my head and take root.  Admittedly, the majority never get off the ground.... either due to their complete impracticality, or being too expensive, or too time consuming.  Or a combination of all of those things.  Or the fact that, with the best will in the world, they would NEVER work.

Over the years I've filled many notebooks with ideas for miniature projects and I'd estimate that maybe 45% have seen fruition.  For the remaining 55%, some of those I worked on for ages, before admitting defeat.  It's dispiriting and frustrating, but I've learned something new from every one.  Very occasionally, I've been able to revisit an abandoned project, when a suitable component has come to light, or an interesting workaround has presented itself.

My most ambitious project kit to date is based on a French automaton doll and I've been working on the prototype for a while, in fits and starts.  I have to admit I'm waaaaayyyyy out of my comfort zone on this one, as I'm working with unfamiliar materials and techniques, but if I wanted a challenge I've most definitely got one!

That said, I am making progress, albeit slowly.

This was the inspiration.... the piano-playing automaton in Lanhydrock House in Cornwall. 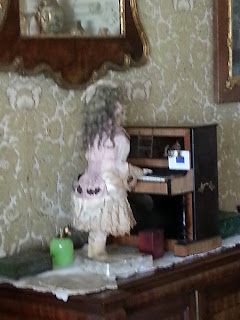 Despite the whole "I relish a challenge" thing, I sensibly decided that making a doll which could actually PLAY a piano was not within my capabilities. However, making a piano that would actually play was certainly, probably, possibly achievable.

Initially I looked around for a small hand-cranked musical movement.  There were loads available but the choice of 'music' was limited and I didn't think that the tinny, plinkety plonk of a musical movement was quite what I should be aiming for.  I wanted real piano music, certainly, but music which sounded as though it might be played by a doll.

After several weeks of entertaining, but initially fruitless research, I finally found a solution, which would enable me to fill the air in a doll's house with proper music.

In addition, during my wanderings I came across a wonderful facsimile of an original catalogue by Roullet & Decamps, famous French automata makers, who almost certainly created the Lanhydrock doll..... 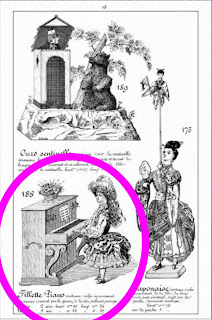 The whole thing is coming along nicely, although it definitely won't be finished in time to release before Christmas, which was my original intended deadline.
Regular readers will know that I'm hopeless without a deadline, plus, at the moment we have the added complication of dovetailing lengthy hospital appointments at destinations diverse and various.   So any deadlines, self-imposed or otherwise, run the risk of being derailed by circumstances outside my control.
So it was serendipity when I recently received an invitation to participate in the Kensington Dollshouse Festival Spring Showcase, which will be held online (yayyyy!) and will take place on February 4-10 2022.   Admittedly a tad early for spring but eminently doable from the point of view of my automaton kit and all the other 'works in progress' which have been languishing since early summer this year.
I've booked my spot and have unearthed my box of notes and components for the automaton and this week I shall be cracking on.  My #3 prototype is tantalisingly close to completion.... I just need to work out a few niggly, naggly problems challenges, which have so far eluded my problem-solving skills, but I know there's a solution if I just keep at it.
Also, that wonderful facsimile catalogue I mentioned earlier.... I'm painstakingly miniaturising it to accompany the kit.  Along with a copy of an original automaton receipt, for a frankly eye-watering sum, which will also be included in a little envelope.
See.... this is what happens.  I somehow always have to further complicate an already complicated  project.
It's definitely one of my less useful, special skills.