Today I set about preparing my fabrics for the new gazebo seating cushions.  I've had the main fabric for a while.... a lovely mandala print in rich jewel colours.  I'd decided to make the cushion backs from plain cotton fabric, picking out two colours from the main fabric.

So far, so straightforward.

I'm a homemade cushion veteran of many years, but I've always opted for simple openings.... envelope, buttons, snap poppers or velcro.  For some reason I've never tackled zipped cushion covers.  They just seemed like a bit of faff and unwarranted extra expense.

Similarly I've never made piped cushions before either, for much the same reason.  However in order to do the lovely fabric justice, I decided to have a go at making 4 piped, zipped cushion covers.

How hard could it be?

Extensive Googling for "easy to sew zipped, piped cushion covers" revealed a plethora of video tutorials, all vying to be the easiest method EVER.  Naturally I didn't fall for their blatantly ludicrous claims and after some considerable time, selected one that I could actually understand.

I did briefly consider making my own piping, but sanity prevailed, so I cheated and bought some ready made, in two different colours to match the plain cotton backs.

Having cut out the front and back pieces, I then set about stitching the piping onto the fronts, facing in toward the centre as instructed.

Easy peasy!  Couldn't understand why on earth I'd never done this before.

Next, the zip.  I watched and re-watched my chosen video and each time I was sure that I knew what to do, but somehow, between my laptop in the office and my sewing machine in the workroom, a mere 10 steps away,  I got fuddled and ended up having several abortive attempts.  No matter how I pinned or basted I just couldn't get it right.   I think the piping was confusing me.

Eventually, after more hours than I care to admit, I finally managed to correctly pin one zip onto one cushion cover, ready to sew.

Then the next conundrum.  How to set and use my sewing machine zipper foot.  It was the piping/zip debacle all over again.  No matter what side I attached to the machine, it was always wrong.  By then, my temper was most definitely frayed to a hairsbreadth, but I was doggedly determined to finish just one damn cushion cover or perish in the attempt.

After several false starts, including having to unpick stitches in the wrong place after having stitched on the wrong side of the sodding piping I finally had the zip inserted.

Stitching the remaining seams on the CORRECT side of the *&@%ing piping was eventually achieved and it was finally time to turn the cover right side out and admire the results of several hours labour.

I couldn't undo the closed zip which was, of course, inside the cover, so I couldn't get to the tzip pull.

By this point, I was ready to throw the whole lot out the window and run amok through the house wailing like a banshee.

No amount of trying to wiggle the zip from outside was successful and I couldn't bear to undo any more stitches so in the end, through gritted teeth, I managed to grip the zip pull through the fabric and millimetre by millimetre move it slowly along until finally I could get my finger inside to grab it.

Of course all of the above had left my pristine fabric looking as though it had been dragged through a hedge backwards so I had to steam iron the cover to within an inch of its life to get all the creases and unpicked stitch holes out.

A WHOLE day to make ONE cushion cover. 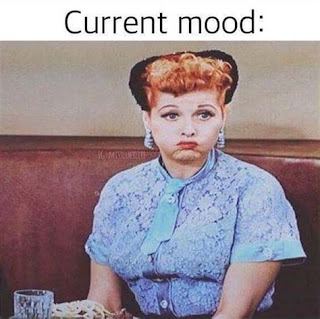