So.........due to a viral lurgy which has laid me low for the past two weeks, there has been no 'actual' work done on the shop. However,while gradually recovering from my feverish state, and tucked up on the sofa in pyjamas and duvet, I was able to do some 'virtual' work, ie planning the display cabinets and working out the decoration of the exterior, now that the doors are finally in place.

This weekend, feeling much better, I indulged in some convalescent 'occupational therapy' and managed to complete the following tasks: 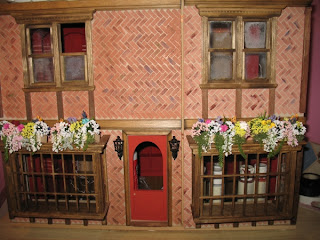 However, some niggly, naggly problems have arisen, to which I can find no obvious solution.
The first floor windows have developed a cloudy, crazed coating, which I can't remove with anything, not even plastic polish. I suspect that this has been caused by a reaction with the wood stain which I used on the window frames, despite being extremely careful to avoid any contact with the window acrylic. Probably the fumes from the stain attacked the inside of the acrylic when the windows were laid on newspaper to dry. Very annoying, and there is no obvious solution, aside from buying two new windows :-(

Some of the little toys which will eventually be on display in my toy shop have been stored in various boxes for almost two years, so I've been re-acquainting myself with some of my tiny treasures over the last few days.

I had forgotten quite how many I had!

However, while mooching around on ebay, I found a few more which were just irresistable, although I now realised that a Sopwith Pup aeroplane kit is rather anachronistic if my shop is set purely in Victorian times. 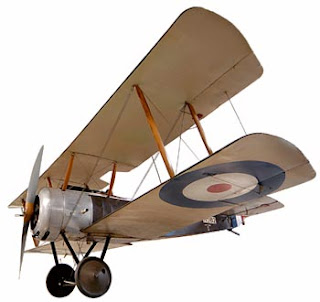 I've also seen some other wonderful toys, which would be more in keeping with a post Edwardian shop rather than Victorian.

So I have decided to have an old-fashioned Victorian shop, set in the late Edwardian period, simply so that I can have mechanical toys which are more in keeping with that era.
That, and of course I can have some lady customers browsing with their children, dressed in my favourite Edwardian costumes.
Posted by Sandra Morris at Monday, October 08, 2007 No comments:

Very busy weekend but I did manage to put in a few hours on the toy shop on Saturday.

Good news is that I managed to get the inside of the door fronts wallpapered and hinged.
Bad news is that I couldn't wield a normal sized screwdriver inside the right hand room and therefore had to use a tiddly little thing to screw all 8 screws into rock hard MDF and have the blisters to prove it.

Good news continues in that when I plugged in the 'extension sockets' to the fronts, all the lights in the bay windows and the two coach lamps either side of the entrance door all lit up twinklingly.
Bad news continued when I tried to close the right side front and found that my cunningly placed plug wouldn't allow the door to close.

Will have to devise an even more cunning way of moving plug socket 1/2" to the right without stripping off the wallpaper or having the relocated socket show on the inside of the door.

Bit of a conundrum but I think I might just have an idea to save the day.