Our post arrived late today.  1.30pm, which is late by anyone's standards, especially if you're expecting a package. 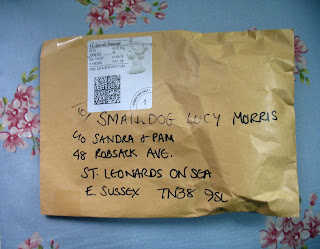 As with most things to do with Small Dog, there's a story behind this particular package.
Some time ago, my friend Sue Newstead, who is WFT aficionado (that's Wirehaired Fox Terriers to you and me) requested I make a set of my miniature picture blocks featuring WFTs.

So, I set about sourcing vintage illustrations to supplement the ones which Sue kindly sent me...... 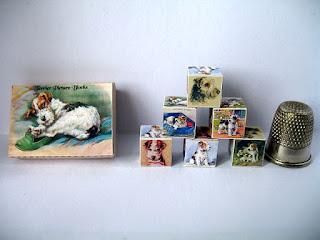 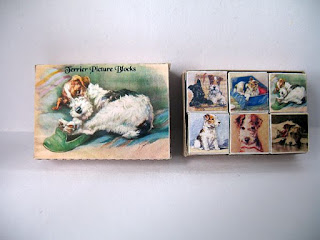 Eventually I finished the blocks, which were duly despatched and arrived safely to be thoroughly investigated by the Medlar House Hounds...... 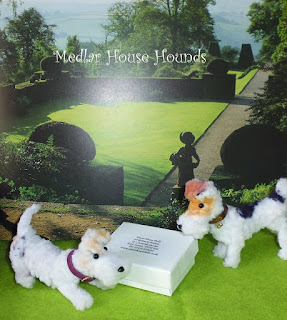 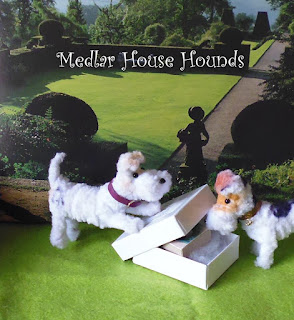 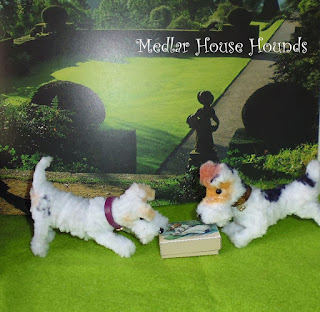 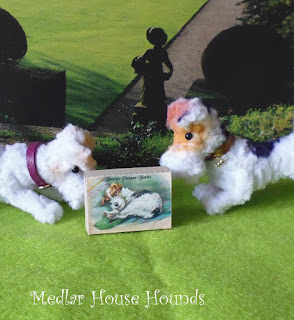 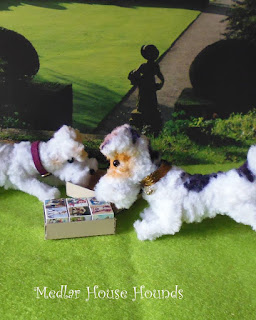 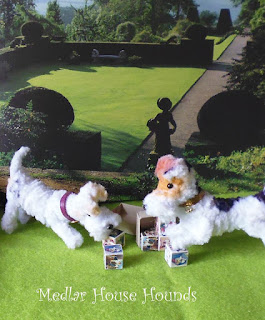 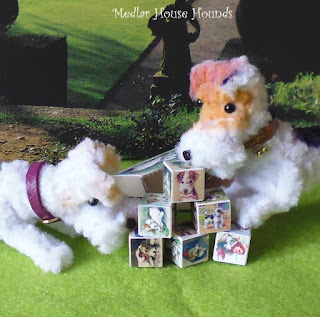 .... who declared themselves delighted with them!

So delighted, that Sue decided to make a Thank You gift to mollify Small Dog, who had overseen the creation of the blocks, muttering all the while about the lack of a set of Yorkshier Terrior blocks, seeing as how she was 'Hedd of Markitten and Komewnikashun' and it was a 'dyabollickle libirtie'. 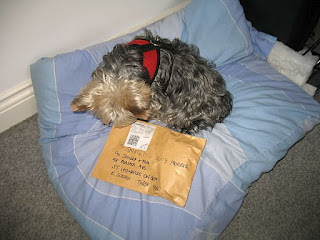 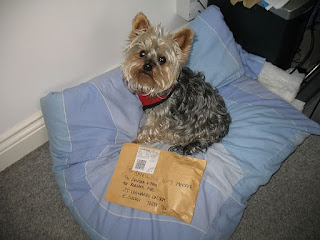 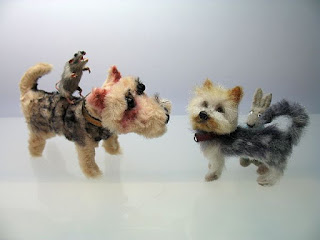 Sue made a likeness of Small Dog, entirely from pipecleaners!  How wonderful is that?!
Here she is meeting Smallest Small Dog, Archimedes (the operatic rat) and Peter, who seems to have cracked the art of Hide & Seek.  Putting two ratting terriors in the mix with a rat and rabbit was something of a trepidatious task but I needn't have worried as they're all getting on like a house on fire.

Incidentally, if you are of a doggy bent, feel free to request a set of miniature dog blocks.  Thus far, as well as several sets of WFT blocks, I've made an Airedale Terrier set and am working on one featuring Poodles, as well as a very special Yorkshier Terrior set for a certain small canine who shall remain nameless. 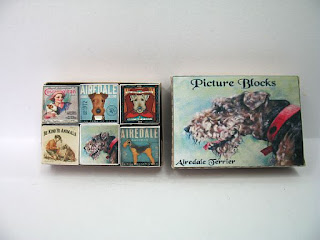 The blocks are wooden, measure just 1cm square and are decorated with a selection of vintage illustrations of your chosen breed.  The blocks fit neatly into a little cardboard box with illustrated lid and cost £12 plus P&P.
I'm making these to order only so for further information please contact me direct.
Posted by Sandra Morris at Friday, June 03, 2016 1 comment:

Considering that Monday was a Bank Holiday, and therefore the working week has been foreshortened, it's somehow felt longer than normal.  Which perhaps explains a sort of 'end of term' feeling in the workroom today. 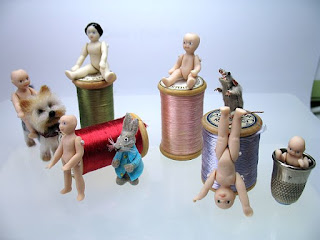 My creative muse has 'done one' and been awol for the past while so I've been tackling a selection of non-creative tasks which require no great concentration, inspiration or dedication to complete. 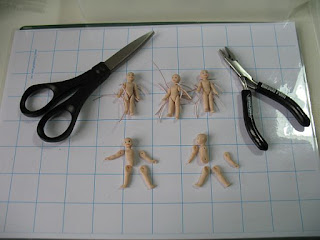 I've had a pile of boxes of dolls and doll limbs awaiting assembly for ages.  Dozens and dozens of assorted tiny, wee dolls, armless and legless.  The stringing process is both time-consuming and relatively mindless.   Over time the mechanical, repetitive motions become calming and soothing.

I've been a bit down in the dumps lately.
Feeling blue
In the doldrums
Dose of the glums
Dispirited
Despondent
Dejected
Doleful
Disordered....

It happens.
To almost everyone at some time or other I expect.
Having been here before I know that the feelings will pass and I will eventually emerge into the sunlight again.

Until that time I'm taking small pleasures in being able to complete tasks which require no great effort of thought while I await equilibrium.

Meanwhile, my newly strung dolls take advantage of their mobility to get up to high jinks with Smallest Small Dog, Archimedes and their new friend Peter.
Perhaps their exuberant shenanigans might just pass that Friday feeling on to me!