There is apparently something mythic about 100.

A Googol is the number one, followed by 100 zeros.

100 is the square of 10
100 is the basis of percentages (per cent meaning "per hundred" in Latin), with 100% being a full amount.
100 is the sum of the cubes of the first four integers (100 = 13 + 23 + 33 + 43). This is related by Nicomachus's theorem to the fact that 100 also equals the square of the sum of the first four integers: 100 = 102 = (1 + 2 + 3 + 4)2.
100 is an 18-gonal number. It is divisible by the number of primes below it, 25 in this case. It can not be expressed as the difference between any integer and the total of coprimes below it, making it a noncototient. It can be expressed as a sum of some of its divisors, making it a semiperfect number.
100 is a Harshad number in base 10, and also in base 4, and in that base it is a self-descriptive number.
There are exactly 100 prime numbers whose digits are in strictly ascending order (e.g. 239, 2357 etc.).
100 is the smallest number whose common logarithm is a prime number (i.e. 10n for which n is prime).
All of which, I'm sure you'll agree, is pretty damn impressive for a number made up of a one and two zeros. (although, obviously, I have absolutely NO IDEA what any of that means!)
Much is also made of the first 100 days of any US presidency, but probably the least said about the present incumbent the better.
If you're lucky enough to live to the age of 100, this success is celebrated by a telegram from the Queen.
But I digress.  In my last post I bemoaned my lack of grit and determination to complete a task which has been extant for more years than I care to remember.  Next year, when I hit my 60th birthday, will be a perfect storm of self-imposed deadlines and targets which, if I'm brutally honest with myself, are unlikely to be achieved.
However, I'm clearly not the only one with procrastination issues, so a helpful comment from one of my blog readers (thanks Megan!) led me to discover a programme called 100 Day Goal which aims to help hopeless procrastinators like myself, stop making excuses (too busy, too tired, don't have the correct reciprocating flange sprocket, etc etc) and Just. Get. On. With. It.
I've downloaded all the lists (I love a list) and crib sheets and I've completed my microactions sheets, which ran to several pages.  I also get to colour in a star for each day I complete my allotted microactions...... what's not to like?!
However, I was a little late to the party for the current 100 Day Goal programme, which closes today, so instead of my 100 Days ending at the beginning of December I'll be collapsing over my finishing line the week before Christmas, which isn't the best timing, but if I stick at it I'll be approximately half way to my final goal... the publication of my book.
I'm fairly sure I'll fall off the metaphorical wagon at points along the way (especially as I have a one week holiday in there too) but I just need to get started and I'm hopeful that the project will gain enough momentum that it will drag me along with it to the finish line.
Well....that's the plan anyway.  Feel free to cheer me on.... I need all the help I can get! 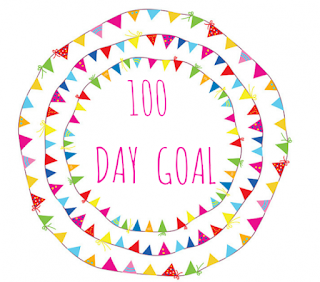 Three days into September and already we've had two seasons.

Yesterday was lovely.... clear, blue skies, warm but not too hot... a perfect summer's day.
Today is much cooler, with a definite autumnal feel and overcast skies.  The evenings are noticeably drawing in... it's almost dark at 8pm.

There are just 4 months left of this year and my self-imposed deadline, which back in April seemed eminently achievable, is starting to look a little tight.  It's my own fault, I've fiddled and faffed around all summer and now I'm starting to panic.

It's simple really..... Just. Get. On. With. It.  I need to stop making excuses and buckle down to some seriously focussed hard work.  I have one commission on my desk at the moment which should be finished this week then I really, REALLY need to get my head around a work schedule which I can stick to.

Well that's the plan.  My helpful desktop timer informs me that I have 231 days until my deadine, which feels like oceans of time, but of course, the days will slip through my fingers like grains of sand and before I know it I'll have two weeks left and still no further forward.

What could possibly go wrong?
Posted by Sandra Morris at Sunday, September 03, 2017 4 comments: