Preparations continue apace for our autumn one day workshops.

Having finalised the dates, we are now hard at work on the myriad details of each session, which we are determined will be A. MAZING!  Our inaugural sessions will feature a selection of unique miniatures, giving students the opportunity to try their hand at a variety of different skills and techniques.

Over the past 28 years I've taught many dozens of classes and I'm really looking forward to our exciting new programme and getting 'hands on' with students again.

As is Small Dog, although in her case it will be 'paws on'.

She is also insistent that I mention 'Yorkshier Terriors' are hypo-allergenic, so our workshops are completely suitable for people with allergies.  Although whether that applies to Yorkshier Terriors with a penchant for rolling in 'fockspoo' is another matter altogether.

Moving swiftly on...... here is sneak preview of just one of the elements of one workshop. 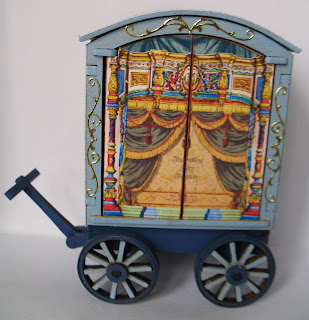 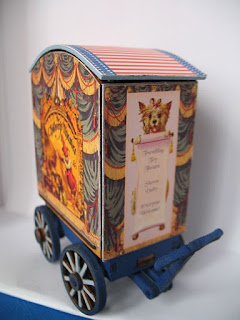 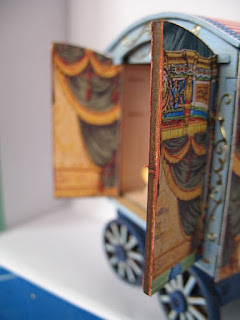 The doors open to reveal..... a secret surprise!

Another session will feature this rather wonderful vignette.... 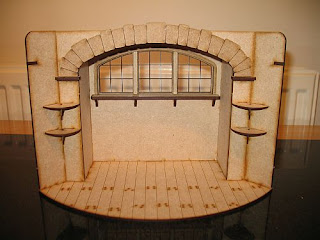 ..... which will be transformed into L'atelier de la Poupée!

Full details will be available during the summer so watch this space.....
Posted by Sandra Morris at Sunday, June 14, 2015 2 comments:

I'd been feeling so pleased with myself too.

Nailed the annual accounts in just two days.  Also did a complete financial review and everything's ship shape ready to submit my personal and business tax returns next week.

So while I was in finance mode, I thought I'd get ahead of myself for a change and make a start on the spreadsheets for this current financial year, and do April and May.

Hidden away in April's business bank statement was a transaction I didn't recognise.  A payment for a substantial sum which I'd certainly have remembered.

I hunted through all the receipts and invoices, checked my online transactions but couldn't find anything relating to it.

What particularly concerned me though, was that the payment was made to towerhousedolls.  Cue checking everything AGAIN.  Still no clue.

So I rang the bank.  It took a while to explain that while, yes, I am Tower House Dolls, no I didn't make that payment to myself.

So I was transferred to the bank's fraud department, where again there was puzzlement.  It appeared to have gone to somewhere in the US, they thought it might be Massachusetts. Had I bought anything from a company called Tower House Dolls in the US?

They admitted it would be an almighty coincidence and I was transferred to a higher level fraud department where I was subjected to a barrage of security and personal questions, which eventually seemed to convince them that I, or rather 'Tower House Dolls', was the innocent victim of online fraud.

So, all our business credit/debit cards were cancelled on the spot and I'm awaiting a number of forms and declarations through the post which I have to submit asap.

Will we get the money back?

UPDATE
Earlier this evening I received notification that the stolen money had been reinstated to the account.

After her bravura performance yesterday, Small Dog is in the doghouse today.

You would think, wouldn't you, that she would be grateful for this care and concern for her health and wellbeing but no.

Normally this would result in an immediate trip to the shower room and a liberal dousing in her special shampoo until the offending stench has been removed.  However, washing her so soon after the (expensive!) Advocate application would render it ineffective so apart from a brisk rubdown with a wet wipe we will have to live with it for another 24 hours.

If we can bear it that long.

Needless to say, she has been looking immensely pleased with herself, basking in one of her favourite scents......  Essence de Renard. 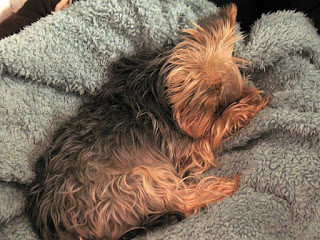 As a fully fledged member of the Tower House Dolls management team, Small Dog now has a seat on the board.

Well..... I say board.  It's more of a comfy blankie in her basket, which is her designated work area as she's not into hot desking.

Here she is earlier preparing for our monthly management meeting..... 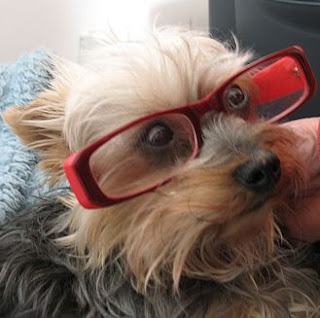 That disgruntled look is down to the fact that she'd just heard that the biscuits were restricted to Rich Tea.  Not, as she'd been hoping, Ginger Crunch Creams.

The following is a transcript of the meeting....

SD was called upon to report on the first few weeks in her new role.

SD wishes to have recorded the fact that under her jurisdiction the THD Facebook page has now attained the giddy heights of a smidgen over 800 Likes.  She claims to have achieved this by linking from her own FB page and actively promoting THD at every opportunity.
SD proposed an incentive bonius, consisting of 1 gravy bone for every additional Like she acquires.

Following an animated debate, during which SD only took the huff once, it was agreed that 1 gravy bone for every 10 Likes was a fair incentive.

We then moved onto the main business, an overview and discussion of the new One Day Workshop Programme, currently in preparation.

SD suggested that she be in sole charge of 'meet and greet' for each of the sessions.

SM opined that if by 'meet and greet' she meant jumping around like a mad thing, laddering people's tights, then the answer was no.

Unseemly (and frankly undignified) response from SD, which the bounds of decorum forbid me to repeat.

Short break for tea and biscuits.  SD wished it to be recorded that Rich Tea biscuits are hardly suitable fare for an up and coming executive of her calibre but nevertheless managed to choke down half of one, plus another bit which fell on the floor.

Meeting called to order and resumed at 11.25

Brief discussion of logistics of workshops and the need for a FAQ PDF for the website, which PS offered to undertake.

SD requested to know WTF a FAQ PDF is.  She was informed that as this is technically outside her remit and she needn't bother her furry little head with such things.

SM provided the team with details of the proposed workshops which provoked a lively debate on whether they might be too ambitious.

SD proposed that if students got stuck she could sit on their laps as the act of stroking her would undoubtedly unblock their creativity.

Lively discussion of whether the application of a small Cold, Wet Nose might be beneficial.
PS suggested that we do some tests with willing volunteers to test the efficacy of SD's assertion.

SD offered to do some durability testing on the finished workshop samples.  Offer declined.

Any other business - Small Dog's request for an iBone denied.
Meeting adjourned at 11.45 am.
Posted by Sandra Morris at Monday, June 01, 2015 2 comments: