..... And just like that, quarter of the year has already gone by in a flash!

How have we ended up in April already?

Time seems to be doing funny things lately... here's a 'for instance'.
This week I started sorting out the paperwork for doing the annual accounts.
Nothing unusual there you might think.... but here's the thing.
It wasn't even the end of the tax year!!!!!

I had started doing a thing for a thing which hadn't even happened yet! From the reigning Queen of Procrastination this is unheard of!  Today, on the first day of the new tax year, I'm in a position to acutually make a start on those pesky accounts, which means that they might be complete before the end of the month.

I think I may have inadvertently slipped into some sort of weird-time envelope, where time passes simultaneously slower AND faster than normal.  Perhaps it's a new phenomenon, previously unknown to physics and quantum mechanics.

Of course, for every 'up' there is a 'down', and projects which should be nearing completion, having started them in January, are no further forward, so maybe my newly discovered time displacement thing only works on stuff I don't like doing.

A few weeks ago, while I was looking for inspiration on the internet, I came across this photo of a mourning doll..... 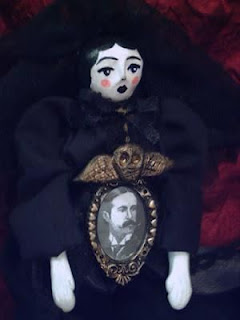 Further research revealed some interesting facts about these intriguing dolls, which were prevalent and popular towards the latter part of the 19th century.

Death was unavoidable in the Victorian home, and it was a rare family who didn't lose at least one child, irrespective of wealth and social class.  In the 19th century, death played far a greater role in everyday life. Children and adults were frequently and openly exposed to death and deceased loved ones, and many of the death rituals are well known and such as mourning dress and jet jewellery.  However, mourning dolls are one of the more overlooked elements of the Victorian grief process.

These dolls were ideal practice for girls and young women, who if they survived to adulthood would almost certainly be called upon to care for their own dead.  Innovatively, many little girls were presented with 'Death Kits', which included a doll with black mourning clothes and a doll-sized coffin.

The 'lucky' recipient of such a thoughtful gift would would then practice dressing the doll, laying it out for visitation, placing it in the coffin, and facilitating a funeral. She might also be expected to practice attending to the grief of the doll’s mourners.

.... and resulted in a toy doll sized 'death kit'..... for the doll's house child who has everything. 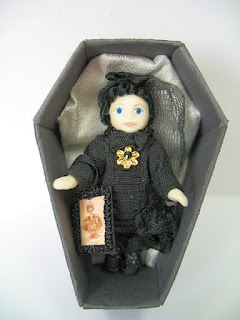 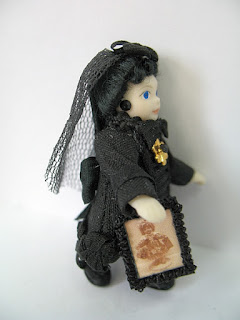 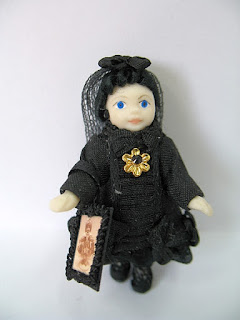 My little mourning doll... let's call her Corvina, an ancient name meaning 'black as a crow' is cast from ivory coloured porcelain and dressed in black silks and lace, complete with a black silk mourning veil.  She has black jet earrings and a dainty gold brooch with a jet crystal in the centre.  She carries a lace edged sepia photograph of the 'dear departed' and nestles on padded silk within her doll-sized coffin box, which comes with decorated lid.

Dressing the little doll was fine but the coffin shaped box was an absolute nightmare which had me questioning my admittedly questionable sanity as I repeatedly tried and failed to get the dimensions and angles just right.  At one point last week my work desk was littered with boxes in various stages of assembly and my waste paper bin was overflowing with discarded disasters.  Who would have thought that a doll-sized coffin would be so darn tricky?! 😣

However, I think I've finally cracked it so Corvina is now available on the website, in the Inspirational Toy Dolls category.