I think that very probably, my last words on this earth are likely to be.......

In my last post I mentioned that the two first floor windows were unusable in their current state and that undoubtably the easiest option would be to simply replace them.

How sage that advice now sounds.

Yes, spending around £18 (remember this figure as I shall be asking questions later) on two new windows, in retrospect, would have been the easiest, quickest and CHEAPEST option.

But fie on 'easiest'. I laugh in the face of 'quickest' and snap my fingers disdainfully at 'cheapest'.

I happened to mention my problem at my recent one day workshop, hoping to enlist the aid of several keen miniaturists who presumably had overcome similar problems with acrylic windows in innovative and inventive ways.

Lo, it was so and I settled on the idea of frosting the acrylic and adding lettering to advertise the shop's wares.

So far so good.

Embarked upon mindnumbingly tedious task of masking all the wood on the window frames before spraying on the frosting. Took absolutely ages as no two bits of wood were the same length or width and kept sliding up and down. 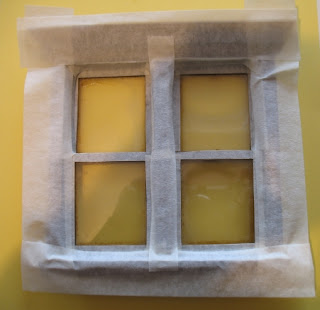 Over the course of a day, sprayed layers of frosting over the acrylic, hoping to build up an opaque coating to conceal the clouding/crazing.
This was partially successful in that it did conceal one problem, but bizarrely highlighted another, which was a line of wood stain all around the edges of the acrylic, which hadn't been visible before.

Took a deep breath and congratulated myself on having had the foresight to buy some decorative border, corners etc, just in case.
Wailed silently when I discovered that using aforementioned borders would not leave enough room for peel off letters so back to the drawing board.

Flirted briefly with the idea of throwing the windows in the bin and buying two new ones but instead stiffened my upper lip, gritted my teeth and rummaged in my 'bits' boxes to see if there was any alternative.

Set about cutting and mitreing the corners for four individual window panes on the first window in the sure and certain knowledge that I would definitely have enough strips to do all panes on both windows.

Probably even loads left over.

So, have ordered another two packs of laser cut decorative strips, from Huntsville, Alabama, US of A, as they are available nowhere else.

Total cost of all this 'money saving activity' - £18.09 (remember how much the two NEW windows were going to cost?)
Number of hours saved - 0
Number of hours spent - approximately 8
Number of gin and tonics imbibed in order to stave off mental breakdown - several

However. I am actually quite pleased. 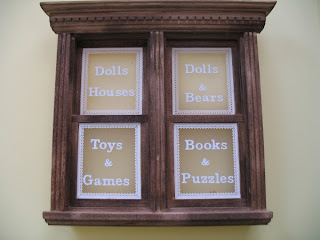 Posted by Sandra Morris at Sunday, November 11, 2007 No comments: