One of the most useful blogs I subscribe to is called Work From Home Wisdom.  As its title suggests, it's aimed at those of us who run a business from home and is always chock full of helpful hints and tips, such as "Oy.  You.  Yes you!  Get out of bed and get some work done!"
Or "Step away from the Facebook page... how many times do I have to tell you?"

Recently there's been a series of posts submitted by readers, entitled '5 things I can't work without' which set me thinking.

There's the obvious things, like the kiln, or my power tools.  On a different tack I could even include Radio 4, which forms the soundtrack to my working day.

But when really thought about it, the answer came down to these..... 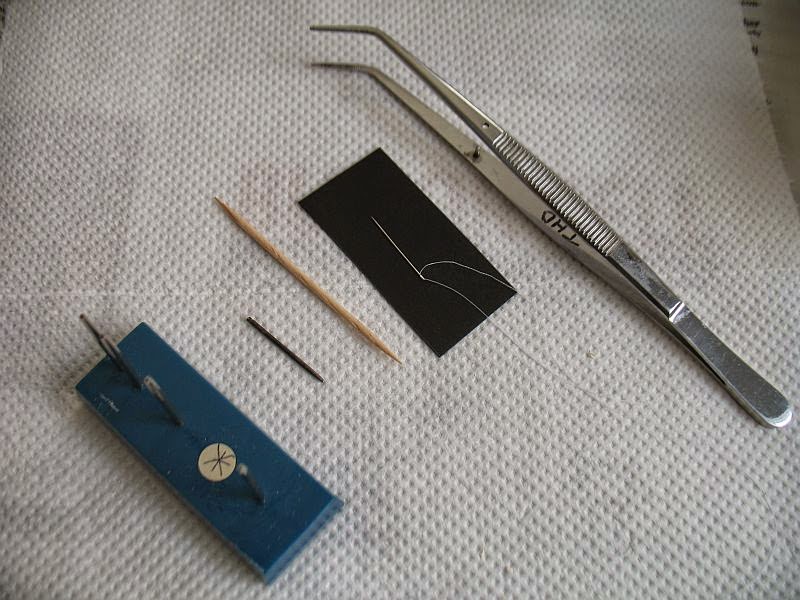 Going from left to right:

1.  Bowmaker.  I have several of these in different sizes.  I use it make tiny silk ribbon bows (well d'uh) as well as ribbon rosettes and pom-poms.  It makes a tedious job almost enjoyable and ensures perfect results every time.  What's not to like?

2.  I'm not sure what to call the next thing, but if I ever lost it I would have to give up porcelain dollmaking completely.  It's what's left of a longer thing, which broke several years ago.  I've been using it for over 25 years so it has stood the test of time.  I use it to make the stringing holes in porcelain greenware...... the soft, malleable castings which are removed from the plaster moulds.  It is just the absolutely 100% perfect size.  As I live in constant terror of misplacing it, or losing it entirely, I have searched constantly over the past quarter of a decade to find another thing EXACTLY the same thickness.  I've tried no end of almost exactly the same size needles and bodkins, but none of them are exactly right.  Even a nanomicromillimetre too big or too small and it's useless.  I might request that it is buried with me.

3.  The humble cocktail stick.  I get through dozens of these a week.  They're great for transferring teeny tiny dots of glue. For picking up teeny tiny beads and crystals.  For mixing two part glues. For stirring small pots of enamel paint. For impaling tiny items to be painted.  For making small holes. For poking things into other things.  Stuck into polystyrene to support glued joints and painted pieces.  The list is endless.

4.  Sewing needle.  But not just any old sewing needle.  This is another of my 25 year love affairs.  This needle is the Shangri La of sewing needles.  It is the thickness of a human hair, and much shorter than most needles.  If you can manage to see it, pick it up and thread it, it practically guarantees that your stitches will be tiny and perfectly spaced.  Unlike ordinary needles it doesn't make big holes in delicate silk ribbon.  I bought several packs of 6 years and years ago and I'm  now down to my last two.  Over time, as they are so very small and fine, they inevitably get lost.  I've lost count of the hours I've spent on my hands and knees carefully doing a fingertip search for ones I've dropped on the floor.  They also bend very easily.  And don't even get me started on threading them.  However, I use one almost every day and I couldn't work without them.

5.  Tweezers.  I'm a bit of a tweezer geek.  Over the years I've tried hundreds, but I always come back to these.  I got them from a dental tools supplier 20 years ago.  The angled tips are set at precisely the right angle for picking and placing tiny things.  There are ridges on the inside of the tips to hold even the smallest items securely.  They are perfectly aligned and squeezing them doesn't make my hands tingle, like many others do.

So there you have it.  Five things I can't work without.

This post is aimed primarily at my customers (trade or retail) who regularly purchase undressed toy dolls.

As we slowly slide into September, then hasten on to Halloween, before we know it we'll be in Christmas crisis, crying in bewilderment "What!  Is it that time ALREADY?!"

Admit it. We've all been there.  Some of us *cough* are repeat offenders.

Our pre-Christmas sales period begins at the end of September which is only 4 weeks away *eeek!* so here at the international headquarters of Tower House Dolls (Amalgamated, Consolidated, Incorporated) we're already hard at work stocking up on kits and toy dolls.  In fact this week I've started on a batch of casting which has to include enough of everything to see us through the next 4 months.

First on my casting list are the outstanding special orders for porcelain dolls or toys which are currently out of stock.  Then comes the low stock items which are likely to run out in the next few weeks.  Then (and this is the exciting bit) during a recent reorganisation of my mould cupboard, I discovered some moulds for dolls which I didn't even know I had.  So I'm casting some of those too.

The porcelain dollmaking process (from first pouring to final stringing) takes on average 6-8 weeks.  So the batch I've started this week won't be completed till mid October, assuming all goes well.  But more to the point, once I start firing in two weeks time, I won't be adding any more to the list.

If anyone out there is planning to purchase a specific doll(s), or porcelain toy(s) in time for Christmas could you PLEASE let me know as soon as possible.  This won't commit you to anything.  If you change your mind that's absolutely fine.  I just want  to avoid the annual problem of being contacted mid November asking if I can supply two of this, or four of that and having to say "sorry, I can't."  I'd much rather have too much than not enough.

Incidentally, the newly re-discovered doll moulds include the following:

In the meantime, here's the view of my desk today, in the midst of casting chaos. 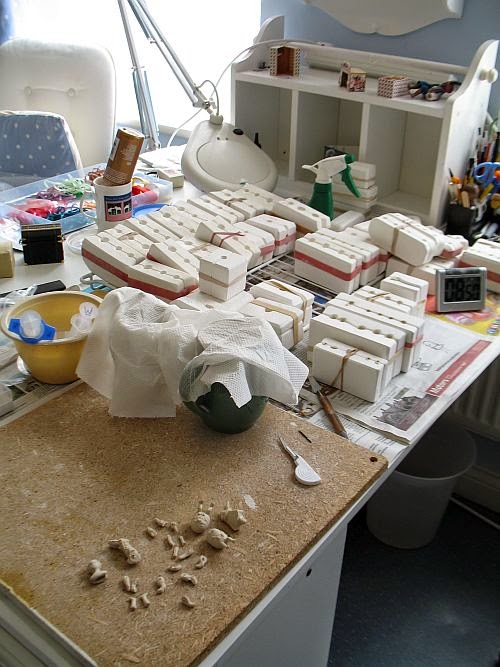 We seem to have a creature living in one of the spare bedrooms upstairs.

First you smell it. As soon as you open the door you notice that there is a definite twang in the air.  It's not unpleasant but it's quite strong.

Then you see it.

Crouched on the floor like a little homonculus, wearing a jacket and sporting a jaunty flannel cravat.

Then you hear it.... bubbling and gurgling.  Occasionally spitting and spluttering.

We keep going in to observe it, marvelling at the activity of this new arrival and checking that it isn't getting up to anything shady.

It's PP's baby really, and she's tending to it lovingly.  Checking its temperature and adjusting its clothing. Mopping up any leakage and whispering encouragement. 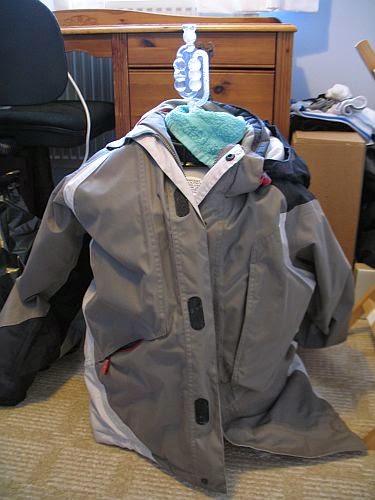 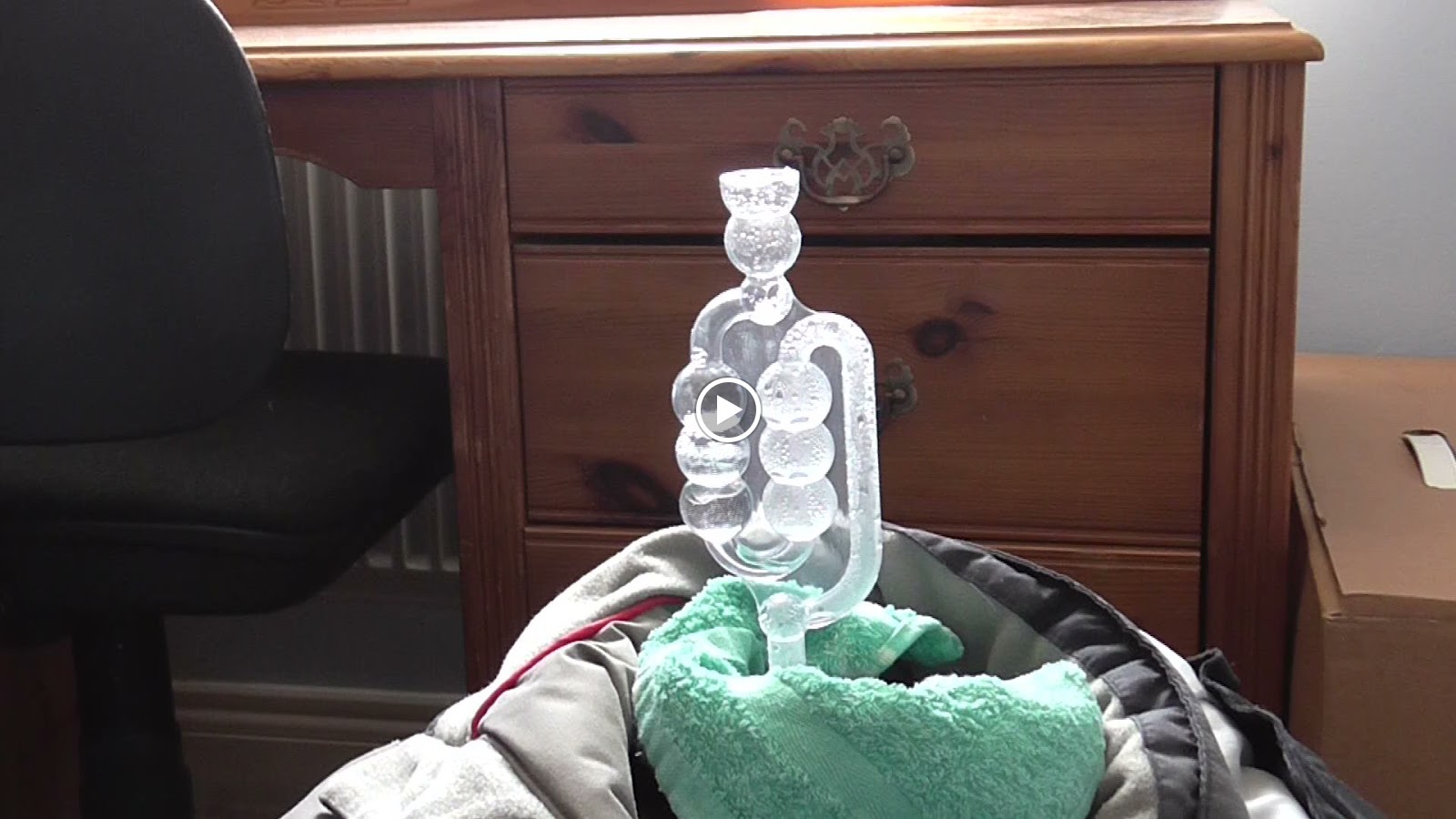 Apparently, in a week's time, it will give birth to 30 bottles of Sauvignon Blanc.
I have to admit I'm a tad sceptical, but so long as it's quaffable I'll reserve judgement.

Best case scenario is we'll get our sight back after two days.

I've been completely submerged in a miniature world of Alice in Wonderland for most of the past month.  What with preparing the Alice toy doll workshop kits for the online show and working on a new Alice-themed toy theatre, I've been feeling slightly batty....  a bit like the Mad Hatter.

It all started when I made a miniature Alice in Wonderland theatre back in July....... 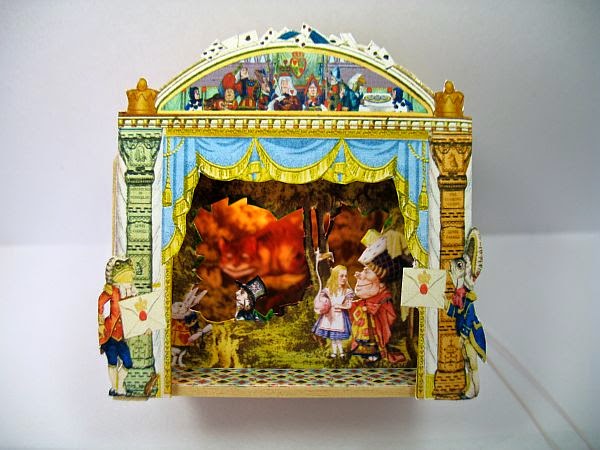 At the time I was really pleased with it, although the more I thought about it, the less pleased I became.  I started wondering about how I could make it more 'animated' by being able to move the characters around, as opposed to their being fixed in place.

And so began several weeks of research and development (also known as wailing and gnashing of teeth) while I worked my way through several prototypes, gradually refining and adding extra features till I ended up with this...... 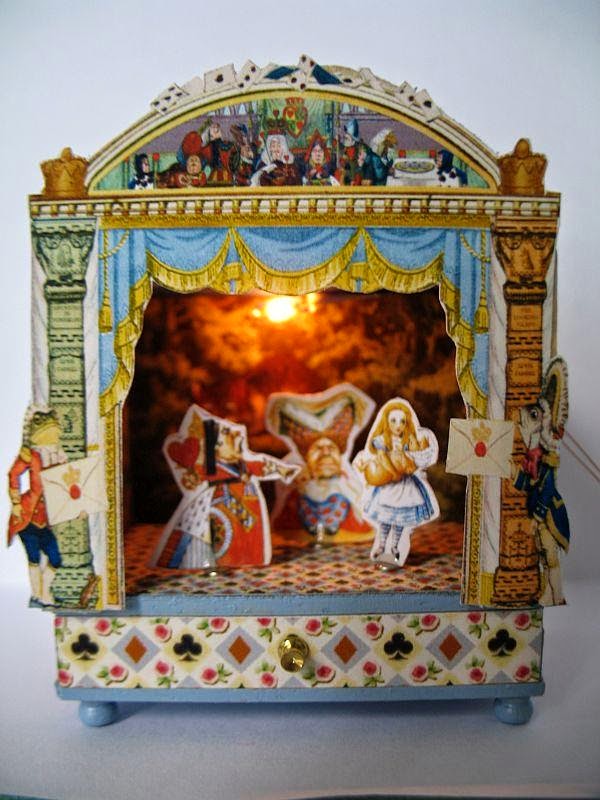 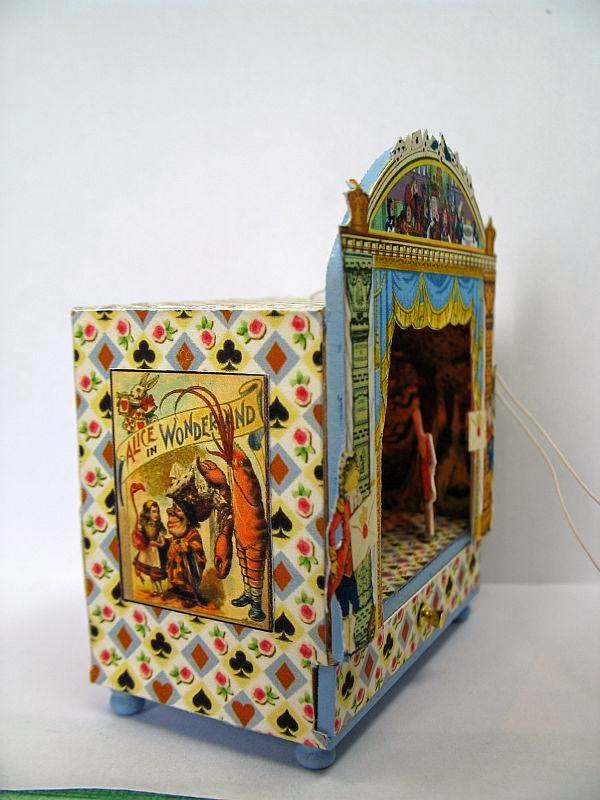 Rather like Alice's adventures in Wonderland, this toy theatre cabinet has several surprises!

Such as the concealed drawer in the base to store the cast of characters..... 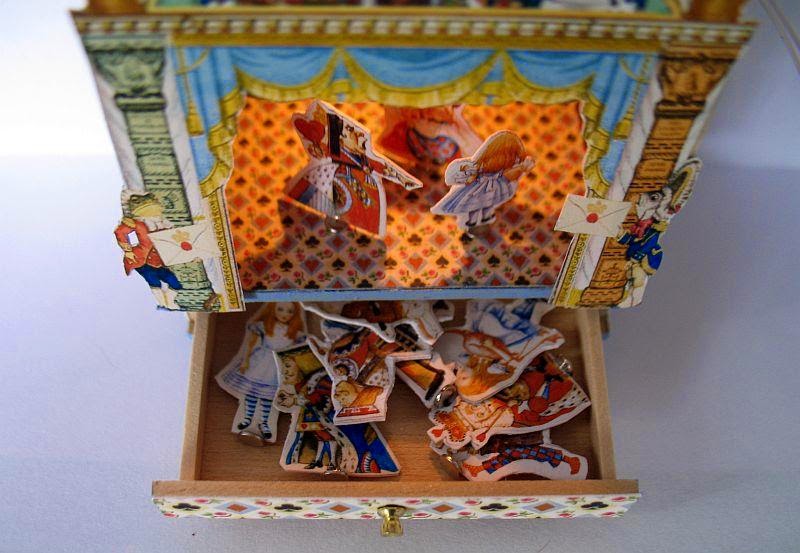 There are 20 different characters included with the theatre, and each one is double-sided so that they can stand with their back to the audience if required.

But the best, the VERY BEST thing, is that each tiny character is mounted on a magnetic base, which allows them to be easily swapped and moved around, and they stand perfectly upright and never, EVER fall over.

I'll gloss over my many attempts which ended in the bin, most of which were crushed in frustration first.  It's taken weeks to get everything just so...... and I can still think of ways to make it even better.

Over the past week I've been further refining the design and there are now two of these theatres listed on the website HERE!

Don't you just love it when a plan eventually comes together.......?

UPDATE - Since listing the theatres earlier today, both have now sold.  I will be making just a few more and in the meantime I will operate a waiting list.  If you wish to order one, please contact me and I'll add you to my list.