I am sure it is well documented (somewhere) that holidays cause stress.

Aside from all the heightened expectations of fun-filled days and a break from the daily grind, there is the endless preparation, which is especially arduous when coupled with a camping holiday.

Most of today has been taken up with cleaning the van, which entailed taking out all the stuff usually stored on the floor during transit.

While cleaning and repacking of the van is in progress, all of the aforementioned 'stuff' will be stored in the dining room, making it look like a gypsy encampment for the duration.

Small Dog doesn't know whether she's coming or going. She's been trying to be in several different places at once today, either supervising cleaning in the van, keeping track of her camping chair or following us around and adding to the general melee.

Today was also scheduled as the best time to clear the decks workwise, package and post all outstanding orders and tie up any loose ends.

By the time we're finally ready to leave we'll all be completely exhausted and fed up with the whole thing.

We're all going on a....summer holiday!

Only 9 more sleeps till our holiday! We're going to a seaside campsite with friends and everyone is looking forward to it immensely.

Thought I might attempt to enter fully into the holiday spirit by making a start on clearing out the campervan earlier today. It may be small but it has a grand total of 19 storage cupboards, drawers, cabinets and lockers, and over time 'stuff' gradually accumulates, necessitating a grand purge in advance of lengthy trips.

I managed to unpack, sort out, rationalise and repack two of the 10 overhead lockers but ground to a halt when I got to Small Dog's own personal locker, which was jam-packed FULL of what she considers to be essential travel and holiday items.

I unloaded, in no particular order:
Plus two other items which she tried to make me promise NEVER to reveal to her blogging public. 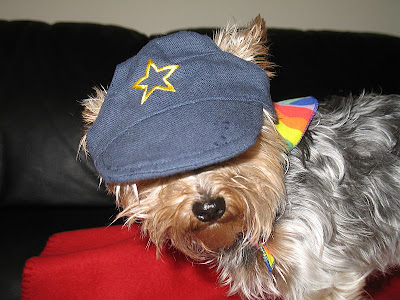 Busy day today but at least I have something to concrete to show for my labours.

At any other time it would definitely have qualified as displacement activity, but since I'm on the home straight with the day nursery and dollmaker's workroom I can claim that everything I've done today has been completely work-related ie making various accessories for the nursery.

I even finished off the lighting and am almost at the stage where I can permanently install the false wall in position, thereby enabling me to fix the skirting boards in place.

Other than that I have to make a hearth and glue the door in place, then the actual fixtures and fittings will be finished.

I'm too bushed to comply with photographs today so they will have to wait till tomorrow, by which time (hopefully) the last few bits and pieces of the structure itself will be done and dusted.

In other news, it is hot and muggy and feels as if a storm might be brewing.

In other, other news it's only 10 more sleeps till our holiday.

Of late my blogging has been erratic to say the least.

It's not that I don't have anything to say, or that nothing of interest has been happening. Even a candid photo shot of Small Dog would be better than nothing (and I suspect Small Dog is of the opinion that a photo of her would be better than anything) but each time I've sat down to compile a blog post I've just stared at the blank screen, seemingly incapable of stringing together a coherent sentence.

So this preamble is by way of kick-starting my dormant blogging creative juices flowing and getting something, ANYTHING, down on the virtual page.

*gazes distractedly out of the window*

See what I mean?

Blogging shouldn't be this hard. I can normally conjure up all manner of stuff but my blog muse has definitely deserted me, so in the absence of constructive displacement activity I'd best go and get on with some work....
Posted by Sandra Morris at Tuesday, July 20, 2010 2 comments:

It was a dark and stormy night.

After a dramatic thunderstorm early evening, the night proceeded to produce gale force winds and torrential rain. Various garden accouterments thudded and banged across the patio and my sleep was punctuated by various graphic dreams related to the meteorological chaos outside, culminating in a particularly vivid one in which we were trying to staple the house to its foundations using a gigantic staple gun.

As I gradually surfaced through various layers of semi-consciousness I began to worry that the dream could be real, until my befuddled brain realised that the noise was due to a team of workmen digging up the pavement with pneumatic drills, right outside our house.

Not a good start to the day.

After 30 minutes of nerve-jangling drilling, they packed up, put a piece of board over the gaping hole in the pavement and departed.

It's still REALLY windy outside and the forecast is for more of the same over the next few days.

However, that should make no difference to a continuing frenetic work schedule which has had me multitasking furiously over the past week. Progress had been made on both the day nursery and dollmaker's workshop room boxes, I'm in the final stages of an important order which will shortly be winging its way to Tennessee, and a flurry of activity last weekend resulted in the completion of a kiln load of soft cleaning. 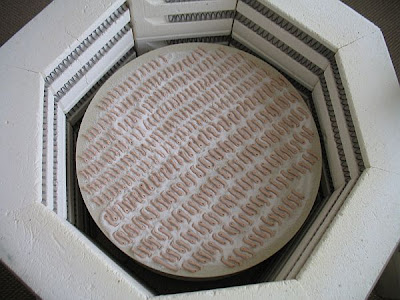 Since then I've completed a full bisque firing and three paint firings and as a result I now have a boxful of tiny dolls to string over the coming days.

So quite a lot done then.

Which makes my current malaise feel rather unreasonable. Despite making serious inroads into the most urgent things on my burgeoning 'to do' lists I STILL feel as if I'm taking one step forward, 10 steps back.

Perhaps it's something to do with the weather, which has been, respectively, too hot, too humid, too windy or too wet.

Last week was most definitely NOT a good week.

Aside from the 'love it/hate it' house debacle, Small Dog had a traumatic experience following her recent vet's appointment. She was booked in on Wednesday morning to have various procedures carried out under general anaesthesia.


She was a mere shadow of her former chirpy self when we picked her up in the afternoon. Very wobbly, falling over, bloody paws, bad cough and sporting a look which clearly expressed her poor opinion of our mothering skills.

Guilt-ridden we went into nurturing overdrive, making up a special little bed for her in front of the patio doors, from where she could keep a convalescent eye on the garden. Her sore throat (courtesy of the ventilator/airway tube) was soothed with a mini milk ice cream, and her dinner (lightly cooked chicken) was served to her on her little bed. As she couldn't manage the stairs at bedtime she was carried, wrapped in her blanky, to a special little quilt-bed on the floor.

She has just about forgiven us.

We had to take the campervan for its MOT, always a nailbiting experience.

Then our gas boiler had to have its annual service - ditto.

Then we found another house which looked just the ticket......arranged to view it and could hardly contain our dismay. How can a house tick all the boxes IN THEORY, but in practice be completely and utterly unsuitable in EVERY WAY?

Then I had a vitally important order to get out....stress, stress and more stress.

Plus last week was SO HOT. Heat really exacerbates my MS and I was in such severe neuropathic pain I didn't know what to do with myself.

Which subsequently led to finding myself in hospital after a complete collapse due to over-enthusiastic self-medication.

Let's hope this one is better.