It's been a fairly hectic few weeks.

Mainly we've been girding our loins to start the 'upstairs makeover' which is now three years overdue, starting with our tired, outdated shower room.  It's taken since the beginning of this year to get some quotes.  Some plumbers simply didn't even respond to our request for an estimate, others came and measured up but then didn't actually provide one.  In the end it came down to two, both of whom were very personable, but one quote was better (not necessarily cheaper) and we were impressed by his manner, so Friday morning he called round to firm up the details and he'll be making a start at the beginning of May.

So we now have a deadline to work to, and as regular readers will know, nothing else galvanises me into action quite like a deadline.

Over the next (quick calculation.... add ten, carry the one, deduct the number you first thought of)....errrmmm.... 7 weeks, we aim to de-clutter like de-cluttering ninjas.  PP is going to work through her TWO wardrobes of clothes, and I'm going to work through my SEVERAL bookcases of double-stacked books and we're going to be #RUTHLESS.

All those clothes that haven't fitted for 10 years but have been kept in the vain hope that they might one day fit again.....

All those books that are stacked two deep on bookshelves, some of which remain unread.

All those boxes of random 'stuff' which we can't quite bring ourselves to get rid off.

All those bits of computer equipment (including two desktop pc towers long defunct) which have been kept 'just in case'.

All that paperwork from the year dot.... old insurance policies long expired, bank statements for 10 years ago, guarantees and instruction manuals for items which we no longer have.

All those arcane widgets, reciprocating flange sockets and odd bits of things, about which we have no clue where they came from, let alone what they're for.

7 weeks to de-clutter and regain lost space.... can it be done? 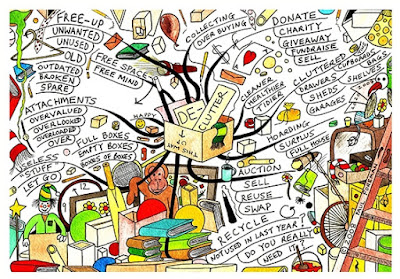 The online March Mini Miniature Show is now live and open for business.  This time there are 50 international artisans showcasing their miniature wares, as well as several workshop offerings, including one from yours truly.


All of my new Red Riding Hood kits are featured on my dealer page, which can be found HERE!

Show orders over £20 (excluding shipping) will qualify for a free gift and for the duration of the show we are happy to combine shipping on orders from the show and website.

Meanwhile, on my desk, a small pack of wolves is milling around while I complete the last of the travelling toy theatre kits.  I didn't notice at the time but one of their number seems a bit out of place. 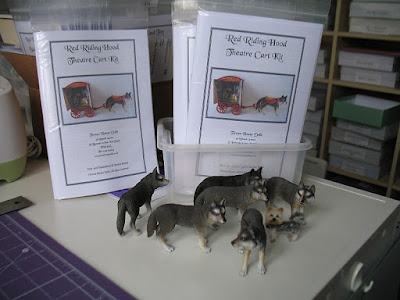 Smallest Small Dog: *whispering*  Pssstt!  Mumm!
Me: *engrossed in work* Hmmmm?
SSD: *slightly panicky* Eckskews me...  helllow.  I'm down here!  *frantically waves a paw*
Me:  Blimey.... what are you doing there?
SSD:  Tryen knott to get ett.  Kan yue koll them off plees?
Me:  *reassuringly* You'll be fine SSD.  They are very amenable wolves.  I wouldn't be using them in my kits otherwise.
SSD: Butt thay ar starten to sirckle and surownd me.....
Me: I thought you were descended from wolves and that they held no fear for a dog of your calibre.
SSD: *blustering* Wel yes.... of korse.  Wolfs ar mai bretheren.  Mai woolf naim is "Smorl Dogg Who Runs Reelie Fast"
Me: Is it.  Is it indeed.  Hmmm.

This weekend I was all set to get ahead of the posse and finalise my new kits for the Mini Miniature Show.  Everything was going swimmingly yesterday and I had just started to print off all the new sets of instructions when my printer, which had been behaving in an exemplary fashion all morning, decided to take a turravee and suddenly stopped working part way through a page.

The LCD screen then showed an error I'd never seen before, saying that the machine had developed a serious fault and would need to be returned to a service centre for repair.

Undaunted, we set about trying everything we could think of, from simply switching it off and on again (always worth a try), through to doing a full factory reset, courtesy of a helpful You Tube video. However, nothing worked and I couldn't carry out any routine maintenance as it wouldn't communicate with my laptop and we couldn't access any of the settings directly from the printer either

This morning I was cautiously optimistic that it might have repented its wicked ways, but sadly it was still possessed by techno gremlins. It's several years old, long out of warranty, and as it wasn't expensive to start with, we decided that it would be an uneconomic repair.

So, there was nothing else for it, but to do a quick online recce of similar printers and fortunately a newer, better model was available in our local computer superstore at a special offer half price deal!  As I was in desperate straits, we shot off to pick one up and within an hour of getting it home, it was unpacked, plugged in, set up and ready to go.

The transition wasn't entirely smooth though.  The old, broken down, decrepit printer didn't want to give up without a struggle, and seemed to be resolutely clinging to its shelf.  I had to forcibly wrench it off the painted surface before lugging it through to the dining room, where it is currently sitting on the floor, sulking.

I'm sure some enterprising Freecycler will take it off our hands.... perhaps to tinker with, or for spares perhaps?

The shiny new printer is a bit intimidating.  It's got a posh touch screen panel and large, colourful buttons which flash on and off repeatedly.  It also does a lot of  busy, self-important cartridge shuffling for long periods, simultaneously flashing its buttons.

I had an inkling of its personality during the setup, when I had to follow the instructions on its posh touch screen.  I was being really careful to install the ink cartridges carefully and methodically and it basically told me to get a move on and close the cover.  I didn't like its manner at all, so continued to check and double check that I had the correct cartridge in the correct socket, keeping a wary eye on the screen to see what it would do.  It sort of sat there with it's metaphorical arms folded, rolling its eyes.

The eye rolling wasn't metaphorical though, as after a few minutes it started scrolling through the onscreen instructions up to the point I'd reached, then stopping emphatically, flashing its buttons at me in a decidedly "hurry up" way.  No sooner had I installed the final cartridge than it whisked the carriage assembly away, nearly taking my fingers with it in the process.

Definitely an uppity, hoity-toity piece of equipment and no mistake.

So the battle lines have been drawn.  It's a 1-1 draw at the moment though, as it made a serious blunder during the first printing task.  I asked it to do an automatic double-sided A5 booklet and it printed it single sided.

We seem to have a wary truce in place... I've finished the first batch of printing and it's been shuffling its cartridges and doing a bit of light flashing, but otherwise all's quiet on the printing front.

How things will develop remains to be seen.  Suffice to say I don't completely trust it yet, and will have to keep a wary eye on it to prevent it getting ideas above its station.  In my experience, you have to take a firm stance with office equipment generally, and printers in particular. 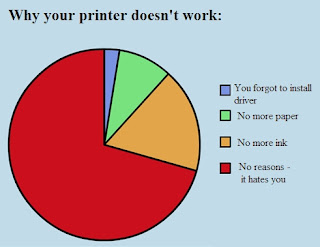 The online Mini Miniature Show has crept up on me again, so today I've been busy designing two new 1/12th scale miniature toy kits which will be launched at the show on Wednesday 8th March.

Based on one of my very best favourite fairy tales, I'm delighted to present....

This kit contains everything you need to make this colourful 3-dimensional game, based on an 1895 original.  However, instead of wooden counters, I decided to have proper characters which can be moved around the board and won't fall over!

Setting off from her mother's house, Little Red Riding Hood makes her way around the board, pausing to pick flowers for her grandmother (miss a turn!) stopping to have a chat with the woodcutters (and another), wending her way through the woods towards her fateful meeting with the wolf.

The precision cut, double-sided game characters include the young lady, as well as the wolf (dressed in a rather dapper yellow tailcoat) the woodcutter and Little Red's mother.

The kit also contains an illustrated storage box for the characters plus a teeny, tiny, wee dice! 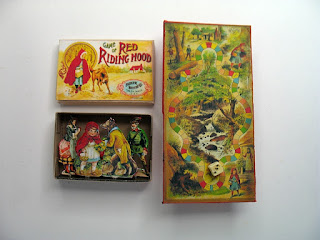 The second kit is a tiny boxed set of story cards.....


There are 8 precision cut scenes from the fairy tale, which have to be put in order to complete the story. 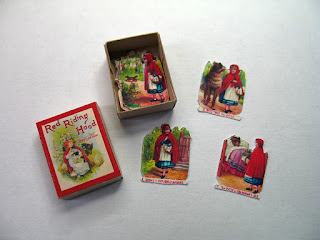 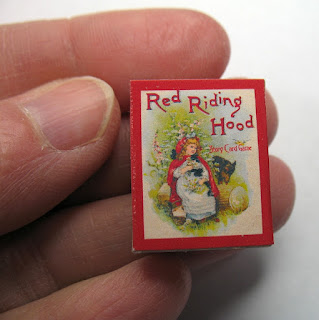 The cards are supplied in a tiny box with illustrated lid.

Depending on how I'm fixed for time (or the lack of it) I'm also hoping to have a few Little Red Riding Hood toy doll kits.... 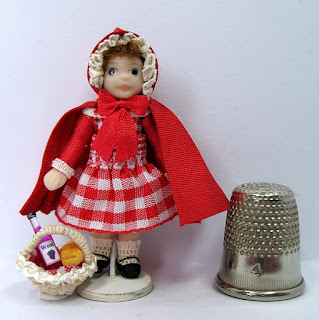 As well as a new Wolf pullalong toy, plus, *fingers crossed* the last ever few Toy Theatre Cart kits. 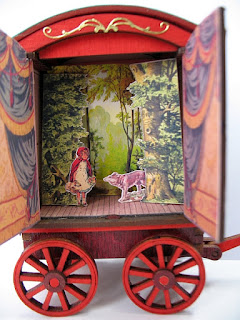 With only four days remaining till the show opens it will go right to wire to get everything finished in time but as I relish a challenge I'll give it my best shot.

All of this LRRH stuff reminds me of a post I wrote a while back, while we were babysitting our little granddaughter (aka GiggleFidget) who does love a good story.....

Me – The storyteller
Small Dog – The Wolf
GiggleFidget – Herself

Me:  Right… let’s have a story then.
GF: Mmmmwahaharr
Me: Little Red Riding Hood… a story about a little girl who unwisely lets a wolf know where she’s going and why.
SD: (opening one eye)  Thatts wolfist.
Me: Excuse me…. Did you say something?
SD: (sitting up to expand upon her theme) Thatts a vyle kalumnie on wolfs.  Ai maiself am dessended from wolfs so ai kno whairof ai speek.
Me: Hm.  Well, anyway, once up on a time….
SD: Ar we doin akshuns?
Me: *sigh* Actions?
SD: Like a plai…. Yue and me.  Ai  be the Wolf.
Me:  Are you sure?
SD: Absewlootlie!  Ai wos born to plai the Wolf.
Me: (doubtfully) He is a very wicked wolf.  In fact if you deconstruct the narrative he is a seductive yet predatory antagonist who preys on vulnerable women.
SD: (fluttering her eyelashes and winking with both eyes) Ai kann do seduktiv.
GF:  Aaaaaaahhhhhhh   giggle
Me: Yes. Well.  We’ll see. 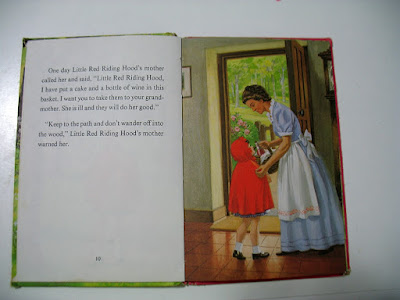 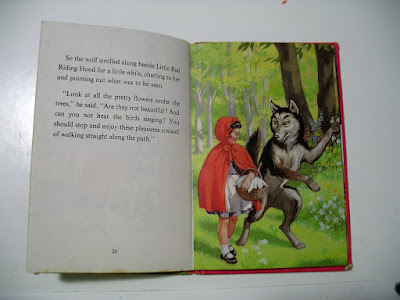 Me: Hmm...that's paraphrasing but we get the gist.
GF: Yaaaahhhhh
SD: When do ai get to gobbul hur orl up?  And the grandmuthr.  Althew she mite be a bitt tuff.
Me: *sigh* 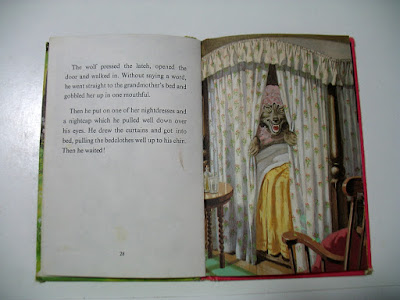 SD: Wate a minit!!!.  WHOT IS IT WARING?  Pinck frillie nitekap.  With Lorra Ashlie spriggd kurtanes and yelloe bedspred?  No wai hoasay... ai am knott waren THAT!
Me: (exasperated) For goodness sake Small Dog... it's only a read through.  You don't have to get dressed up.  Don't be such a drama queen.
SD: (huffily) Dramar kween!.... *mumbl*muttr*grumbl* 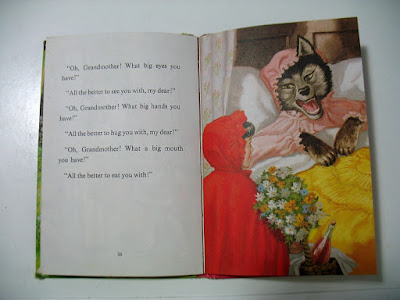 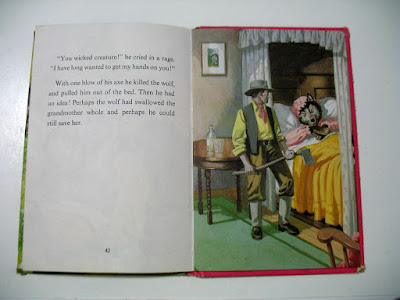 Yesterday was the first day of Lent.

As is traditional, around the dinner table last night, talk turned to what we were intending to give up.

As is traditional, I initially opined that I would be eschewing snouts and entrails.
Similarly, Small Dog declared that she would give up tripe.
Good call SD.

But then I reconsidered and decided to think outside the box.....

Therefore, I shall be giving up procrastination..... my guilty pleasure.

Whether I can commit to a whole 40 days and 40 nights of procrastination free living I'm not sure.  I may well spectacularly fall off the wagon.

But *tentatively* so far, so good. 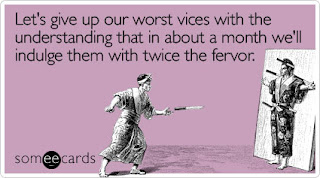 Posted by Sandra Morris at Thursday, March 02, 2017 No comments: