After several weeks of fairly autumnal weather.... cool mists, grey skies, rain etc.... summer has returned for a last hurrah, and the next three days are set to be sizzling.

Which is why I'm now berating myself for choosing today to do a full bisque kiln firing.  This is the current temperature it has reached, thankfully the top temperature, which it has to hold for 15 minutes before switching itself off. 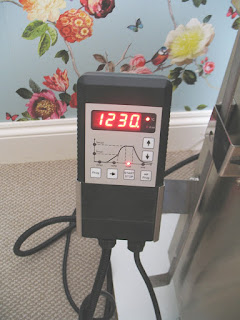 Which I time to make sure it does.....then 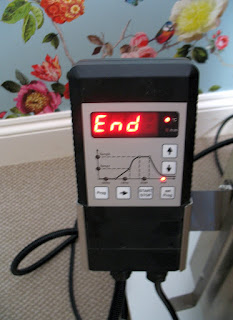 Inside it's hotter than Hades.... a white heat that would melt your face off if you were ever mad enough to open the lid. 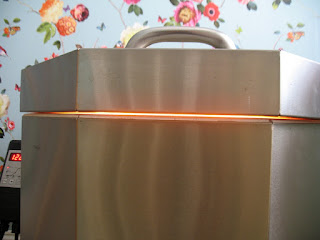 It will gradually cool down over the next 24 hours and around this time tomorrow it will be cool enough for me to open the lid, although the contents will still be uncomfortably hot to handle.

Contained within are around 300 assorted tiny dolls, with their respective arms and legs.... so approximately 1200 limbs.  It's taken many months to cast, soft fire then laboriously soft clean each piece ready to bisque fire, and it will be several months more before all of the faces have been meticulously china painted and fired 2-3 times more.  Then arms and legs will have to be re-united with their bodies and carefully strung to create jointed, movable limbs. 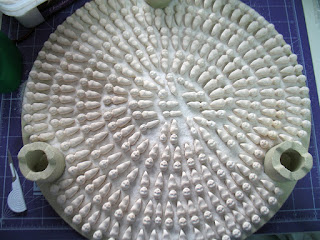 Despite packing the four kiln shelves with military precision, I was unable to fit everything in, and I estimate that there are enough limbs left over to half fill the kiln for a future firing, so I know I will be tempted to cast more in order to fill the remaining space.  Seems such a waste not to. 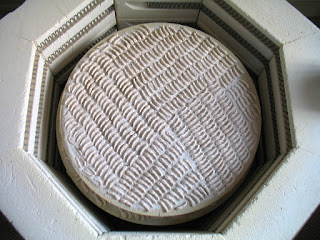 Opening the kiln after a bisque firing is always a nail-biting, trepidatious time. Hopefully I will discover a perfect fire, no breakages, bubbling or cracks.  The vitrified porcelain should be a velvety matte, not chalky, or more disastrously, bubbled and shiny.

An underfire, although frustrating can be remedied by re-firing. An overfire is impossible to rectify and the entire kilnload would have to be dumped.  In all my 30+ years of dollmaking, this has only ever happened once, a long time ago, in a previous kiln, where a piece of porcelain fell against the kiln sitter, preventing it from tripping the kiln off when the correct temperature was reached. As a result the temperature climbed and climbed, and we were only alerted by the smell of burning as the floor beneath the kiln melted.

Thankfully we found out before the whole house went up in flames, but since then on I mount the kiln on a piece of old kitchen worktop and ensure that I am always present in the final stages.  Of course it's much easier to monitor what's going on inside with the aid of the computerised panel on my current kiln, which accurately relays the internal temperature, and stage of the firing.

However, it's impossible to gauge exactly what's gone on until the lid can be opened. Pieces can shift, shelves and shelf supports can collapse, kiln elements can slip out of their grooves.... any of these could cause catastrophic results.

So fingers crossed.  In the meantime we're trying to disperse the heat by leaving all the doors open.  I'll keep you posted on the grand opening tomorrow.....