Procrastination is the bad habit of putting off until the day after tomorrow what should have been done the day before yesterday.

I am a master procrastinator. I can work really hard at putting off doing stuff.

In fact I can expend more energy putting things off, than I would if I just did the stuff in the first place.

But there is is.

Procrastination is in my nature and I can no more change my nature than the leopard can change his shorts.

However, I'm having a reasonable go at it. And in the process I have come to the conclusion that I simply cannot operate without deadlines.

For example I now have the luxury of a month or so in which to work on my projects. I've been really looking forward to this creative windfall, and the projects themselves are a means to a hopefully fruitful end.

Similarly, I have a myriad ideas for new toys and games, some of which are already off the drawing board and languishing in various work boxes. They all need developing and refining, which takes time, which I currently have in abundance.

Granted we are only 3 days into my 'projects month' but thus far I have done nothing.

Well I say nothing.

I have in fact been china painting and firing, packaging orders, working on commissions and catching up with admin-related tasks, as well as trying to clear space in two of the spare bedrooms, so I haven't exactly been sitting with my feet up this week. But I just know that it will come to the end of this month and I will feel fed up and frustrated that the time will have slipped away without serious progress on my projects.

So I have taken an executive decision and set up some self-imposed deadlines, to give me a gentle nudge in the right direction.

Whether or not they will yield results is anybody's guess but without them I am surely lost.

In other, but related news, Small Dog has yet again slipped under the radar today and escaped being shorn. I think she's got wind of our intentions and has successfully made herself practically invisible. Either that or she's managed to get hold of one of these.......... 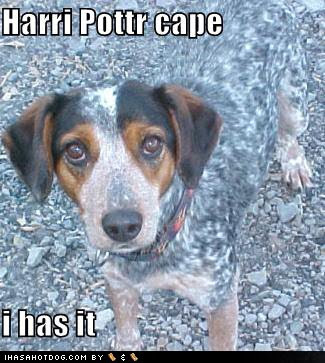 LOL Love the Picture Sandra. I was so looking forward to seeing pictures of you all giving small dog a Hair cut..

She has escaped our evil clutches once again.

She's tentatively pencilled in for a short back 'n' sides tomorrow.

Next thing you know she'll've got hold of the Hogwarts Sorting Hat, joined Slytherin, usurped Lord Voldemort, and taken over the WORLD.

What do you mean I need to get a life?

Lemme know how it works out with the self emposed deadlines.

Loved the pictures of small dog in previous post. :)