I have spent the last few hours dealing with the bane of my life.

The dictionary definition is as follows:

Property, as personal belongings or equipment; things.
Sounds quite benign doesn't it?  But it isn't.

No by no nonny no.

Left to its own devices, it spreads like a malignant miasma, inundating previously stuff-free areas and breeding uncontrollably.

Most craftspeople/artisans will be familiar with its insidious behaviour.  But I've come to the difficult conclusion that in many instances we have only ourselves to blame.

I'll give you a for instance.

The things I make a really small.  Think of a small thing then halve it.

So even a few inches of narrow lace or ribbon, or small scraps of stripwood, can be pressed into service to create something.  As a result I rarely throw away anything other than practically microscopic bits and bobs.  When I finish a project, a new miniature, or restocking kits, there are always some bits left over, which I pop into a box with the intention of sorting them out and returning the individual components to their original storage.

Naturally, this doesn't happen, so every now and then I'm faced with the gargantuan task of either sorting through assorted boxes of stuff and restoring the contents to their proper home or simply emptying the boxes into the bin.  This latter option is always exceedingly tempting, especially after an hour or so of picking out tiny pieces of lace and ribbon, scraps of fabric and leather, and offcuts of stripwood etc.

However, today I buckled down and sorted out 8 boxes of assorted stuff, consigning only a small proportion to the bin.  It's at this point that I solemnly pledge NEVER to let leftover stuff accumulate to such a level EVER AGAIN. 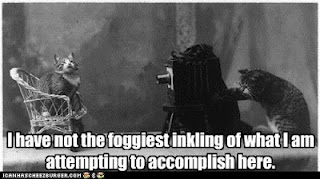