I had to be up in the middle of the night at the crack of dawn this morning.  It's not often I see the wrong side of 6am but it's PP's baby-minding day and I was terrified I'd go back to sleep after she left.

I'm definitely not a morning person, but on the odd occasion I'm up and about really early, I have to guard against filling those extra hours with flimflam and taradiddle.

However, this morning, having allocated myself a perfectly achievable 30 minutes for checking emails etc I turned to FB and found one of those 'memories' posts from three years ago had turned up in my newsfeed. 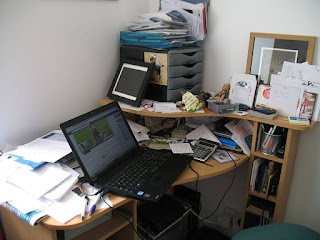 In it I had bemoaned the state of my desk in the office.  To be fair, it can look much, MUCH worse than that.  I'd rate that as a 5 on a scale where 1 is the tidiest it's ever been (ie straight after it was first installed) and 10 is 'no space for even the thinnest of waffer thin mints'.

By comparison, this is what it looks like this morning...

I blitzed it on Monday, and while it wasn't cleared, at least things were in tidy piles.  I've had much bigger desks in the past and found that, as with space anywhere, stuff expands to fill the available amount of it.  I naively thought that it would be easier to maintain order on a smaller desk.

Of course my inability to keep any horizontal space clear of stuff reaches impressive heights in the workroom, which I'm aiming to tackle shortly as I have some pullalong wolves to deal with and there's nary a few square inches of free space.

It's a well known fact that creative people tend to be messy.  One of Einstein's most famous quotes reinforces this.... 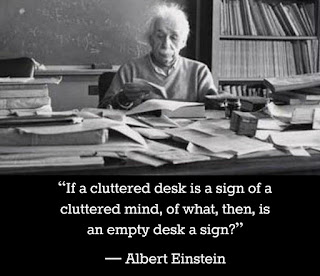 I wonder whether, in lapses during conceiving E = mc2  he might have devised the optimum state of messiness which still allows work to take place, before the tipping point (quite literally) when the assorted piles of stuff start to slide and collapse, rendering further work impossible.

There's probably a formula for it.

Anyway... I've decided that rather than endlessly struggle to maintain a clear and tidy desk, I should instead embrace the messiness and simply work with it.

This is a fairly accurate representation of my office desk, although the areas for odds, ends and doodles is much larger.

I need to put that Einstein quote up in my office at work and my desk at home!!

It does reassure me to be in such illustrious company! ;)