We returned from holiday yesterday.

Well, I say ‘holiday’. I should perhaps use the word advisedly. It is heavily imbued with overtones of rest and relaxation, a longed-for oasis of calm in an otherwise turbulent life.

Having spent 10 days on ‘holiday’ I now feel only marginally less stressed than when we left, and in definite need of another holiday to recover from this one.

It all started promisingly enough. We arrived at the campsite at the appointed hour and found a lovely spot on a terrace, overlooking a wooded valley leading up to sunlit, grassy slopes, atop which a horse and rider were trotting out in the sunshine.

After setting up the van, we set about the task of pitching the day tent/awning. Our campervan, though undeniably small, is perfectly formed. I like to think of it as ‘diminutive’ and ‘cosy’.

Those of a less generous disposition might refer to it as ‘cramped’ or even ‘poky’.

One group of friends joined us later in the afternoon, fortuitously pitching their much larger motorhome next to us. Two more groups of friends arrived over the course of the weekend and a party atmosphere ensued, promising much in the way of R&R over the days to come.

However, camping, even with the relative home comforts afforded by a campervan, is primarily an outdoor pursuit. Aside from sleeping, almost every waking minute is spent outside and there are many essential ‘jobs’ to undertake.

Fresh water must be collected from a service point, and ferried back to the van where an ingenious (if Heath Robinson) pump, devised by PP, transfers the water from an aquaroll into the van’s onboard tank. Waste water is collected in a large, flat tank on wheels, which sits underneath the van. This must be regularly emptied at the waste water facility. Ditto the van’s chemical cassette toilet. Not to mention regular visits to the onsite recycling facility, and the shower block, washing up area etc etc etc.

Rest and relaxation, therefore, come quite far down the priority list. Which, allied to the surfeit of fresh air taken on a daily basis, results in a permanent ‘I-could-just-do-with-a-nap’ feeling.

Small Dog is similarly affected. She is normally a frequent napper, but while camping she feels it is her duty to constantly patrol the perimeter of our pitch, warding off potential incursions from other dogs, as well as rabbits, squirrels, birds, children etc. When not on patrol, she likes to lie in her chair, keeping a wary eye on proceedings lest she miss out on the opportunity for a bite of sausage, or a welcoming lap to sit in.

However, undaunted, we all gamely attempted to get into the holiday spirit, hampered by resolutely grey skies, leavened only by occasional glimpses of the sun. At each brief appearance of the big yellow burny thing, everyone on the campsite quickly erected their chairs and sat out hopefully in the expectation of a few hours of warming sunshine. Mostly this expectation was dashed within a few minutes as clouds scudded in from nowhere, bringing all their friends with them for the duration.

Then, on Day 4, just as we were finally beginning to relax and get into the swing of things, I received a nasty spider bite. I had been pulling on my jumper when I felt a sharp sting on my arm. Suspecting a bee or wasp has somehow found its way into the sleeve, I shook it vigorously and was shocked to see a large black spider fall out and scuttle off. Almost immediately a painful red lump came up on my arm which we treated promptly with a sting/bite relief solution and ice pack, followed by antihistamine cream and tablets.

However, next day the swelling was worse and extended all down my forearm, with pain radiating into my hand and up the arm into my neck. Large fluid-filled blisters appeared at the bite site. I was also feeling shivery and unwell and spent most of the day in the campervan hoping it would improve until we finally made a call to NHS Direct who suggested I make a visit to a local doctor to have it checked out.

Without a positive identification of the offending spider, it was decided that as I’d survived for 48 hours the spider probably wasn’t poisonous, but that the bite was infected, so I have been on antibiotics since then. For several days the only relief I could glean from the throbbing pain in my arm, was to raise it above my head. I made an interesting spectacle, and hoped that fellow campers didn’t infer that I had developed fascist leanings.

To further add to the catalogue of unfortunate events, PP put her back out, and was forced to adopt a curious crab-like gait. As bending over was extremely painful, she had to perform a slow-motion version of the splits if she needed to pick anything up. By this time, what with my stiff-armed fascist salute and PP’s crustacean scuttle we were designated as the site entertainment and campers were going out of their way to view ‘The Odd Couple’.

Not to be outdone in the incapacity stakes, Small Dog was taken ill on our last day. I will spare you the gory details but it wasn’t pleasant and we feared that we would have to cut our holiday short and head back home a day early.

Luckily one of our friends is a vet, and she kindly checked her over then gave her some medication to tide her over till we got home. However Small Dog’s last day on holiday was spent feeling poorly, wrapped up in her blanky on her little chair, with only a bowl of water to sustain her.

So all in all, not a universally successful time was had by all, although we seem to have successfully survived more or less intact.

Now there is just the small matter of the laundry mountain to tackle, not to mention the post mountain, and email mountain. The weather today is resolutely miserable grey and wet, and I am sure that I can sense the first hints of autumn in the air.

EDIT - my mood in a picture 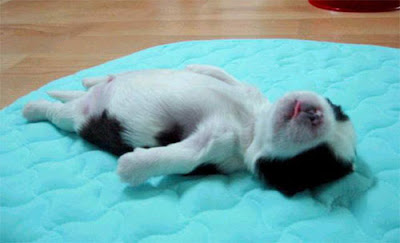 well, certainly sounds like a holiday Sandra ! did make me chuckle though reading about it, although I feel for pp with her crab doing the splits walk, I do that one quite often as my back is prone to "go" at inopportune moments and very stylish it is too !
Hope youre all fully recoverd soon,
julie xx

Jesus, a spider bite! I knew they were after us. Hope it is better now.