I've had several people questioning whether my spider bite could actually have been caused by something else. Apparently it is a commonly held belief that UK spiders don't or can't bite.

I can assure all spider-bite doubters that it was most certainly a bona fide spider. It must have crawled into my jumper sleeve, which had been draped over my chair in the tent awning. When I pushed my arm into the sleeve it must have gone into attack mode and stuck its fangs into me. I quickly withdrew my arm and shook the sleeve (I was in the campervan at the time) and a large, black spider dropped out onto the carpet. I was so shocked I just kicked it out the door without thinking it might be a good idea to capture it for identification.

However, I did have another spider bite previously, several years ago. That time I had picked up a damp towel hanging over the banisters and felt a sharp sting like a jab from a needle. I dropped the towel and was dismayed to find an enormous house spider attached to the bit of skin between my thumb and forefinger. I shook it but it was firmly attached so I had to knock it off with my slipper, before bludgeoning it to death. On that occasion it actually drew blood and again my hand swelled up like a balloon and was painful for several days.

I normally react quite badly to mosquito or any type of insect bite, but those two spider bites were off the Richter scale for swelling and pain.

Perhaps with the amount of spider venom currently circulating in my system I might develop special spidey powers, although being able to shoot webs from my wrists would be of limited practical use and conceivably a major inconvenience in daily life. 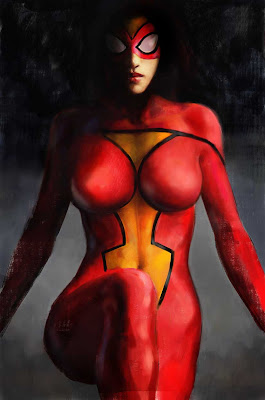 Although with my luck I'd probably end up more like this....... 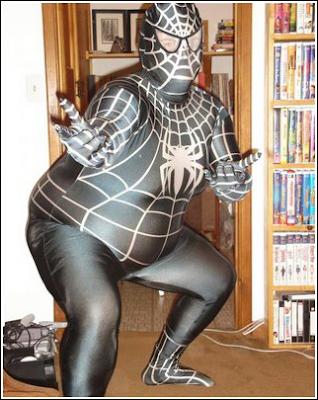 PS - Read THIS if you still doubt the capacity of British spiders to bite humans.
Posted by Sandra Morris at Tuesday, August 10, 2010